AVATRINA Competes at the XPRIZE Semifinals 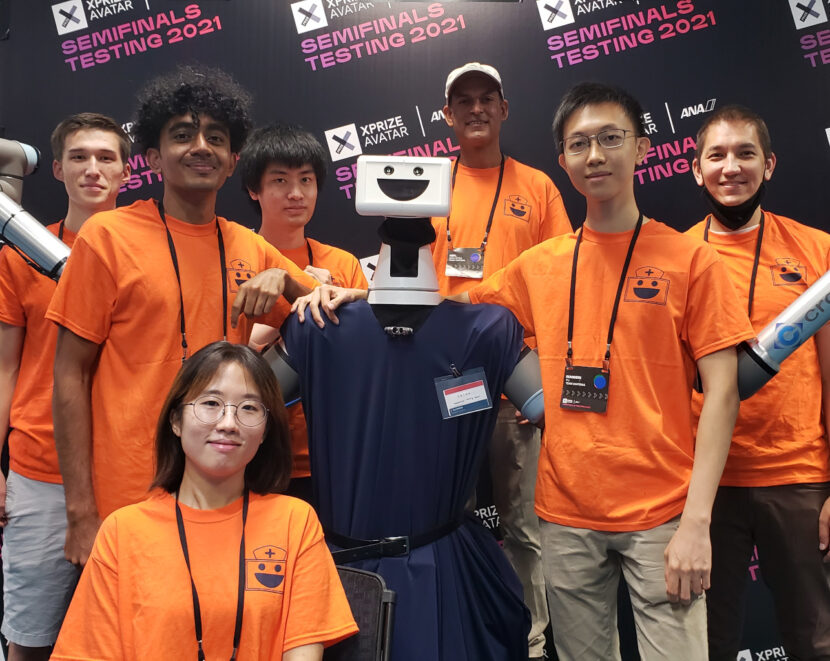 On September 15-19, Team AVATRINA competed at the XPRIZE semifinals in Miami, Florida, USA. Ultimately the system performed extremely well and we are pleased with how the competition played out!

It was a bit of a logistical whirlwind to ship the equipment to the convention center and travel during the COVID pandemic. Seven team members were able to attend with Patrick Naughton, Vignesh Ravibaskar, Minkyung Kim, Jing-Chen Peng, Neil Malhotra, Nairen Fu, and Kris Hauser attending. The XPRIZE organizers did a great job with a thoughtful organization and enforced COVID safety protocols like requiring vaccinations, masking, and social distancing.

The competition was held in the James L Knight center on the Miami riverfront, close to all the action and vibrant culture in downtown Miami.

The robot has changed a fair bit within the last 6 months, and we now have TRINA in clothes and with a cute-looking telepresence head. Its boot-up procedure is improved so that it can go from power off to entirely functional in 5-10 minutes. The left hand has a parallel jaw gripper and is used for manipulation, while the right hand is purely used for tactile sensations. The drivers for the Righthand Robotics Takktile gripper are somewhat flaky, so we decided to disable movement in the interest of system robustness. The mobile base was changed from a Fetch Freight to a Vector omnidirectional base, which allows strafing motion and is hence a little more intuitive to operate.

During testing, both operators were trained within 45 minutes or so, and were able to accomplish all three tasks within 15 minutes. One of them decided to repeat the tasks three times!

We addressed a problem faced in telepresence while wearing VR goggles: your face isn’t visible while wearing goggles, so a facial video looks a little odd, and doesn’t convey all of your emotions. With a little bit of training video, we can deepfake your own face to show on TRINA’s head display. It doesn’t work perfectly, as it can be fooled by glasses and poor lighting conditions. Nevertheless, the quality of this technology is improving quickly.